Steven Patrick Wilson, also known as Ghosthood, is a Grammy and Dove Award nominated multi-genre songwriter and producer in Nashville, TN. Wilson has worked on and secured cuts with numerous major label and independent artists such as Sam Hunt, Plastik Funk, Nawas, Leeland, Lukr, Matt Maher and Alle Farben. His talents span across genres and outside of commercial music into film/tv advertising, securing placements on E!, MTV, ESPN, The WB and Smallville. A multi-instrumentalist with proven pop sensibilities makes Wilson a sought after collaborator in the business. Wilson owns and operates Ghosthood Studios in Nashville and can be found releasing music of his own under that same namesake.

Wilson approached us with a empty backyard and dream of the ultimate backyard, multi-room studio. The property, in one of the historic districts in Nashville, had to pass many tests to clear historic regulations and the approval of the neighborhood. If sound isoaltion wasn't already a potential issue for the neighbors, this property is located about 50ft from an activate railroad track. Once construction was complete, this 1300 sqare foot facility is as isolated as you would expect from any worldclass studio, even as trains thunder by.

and turn on Notification...

for our Latest News on... 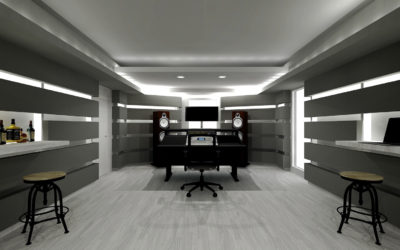